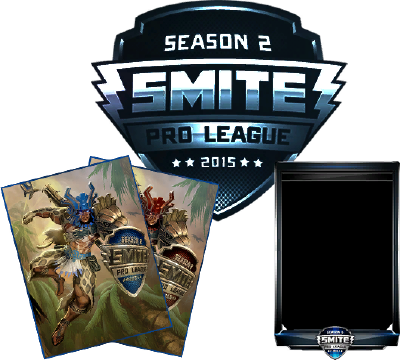 and was purchasable in-game. Every ticket purchased contributed $2.50 to the general prize pool for Season 2 of SMITE eSports. This event lasted until February 2, 2016.

Fantasy Points were earned in two ways. The first is by equipping the Season Ticket Loading Frame and winning games with it. Every win would award 15 Fantasy Points. It did not work in Custom or Practice games.

The second way to earn Fantasy Points was to predict the winning team in the SMITE Pro League Match-ups games via the Fantasy Game (accessed by the Season Ticket 2015 button on the home screen). If the winner was correctly chosen, 20 Points would be awarded, per guess. Picking a “Set of” or “Best of [2+]” series correctly granted 40 Fantasy Points instead. Picking the winning team(s) in a tournament would earn +20 for a one-off round, 40 Fantasy Points for every other round in the tournament they won, and an additional 60 if they won the championship match in the tournament.

for a 500 Fantasy Points bundle. Every bundle purchased contributed $1 to the general prize pool.

These are the items that could be earned from the Season Ticket 2015 either upon purchase or by collecting enough Fantasy Points.