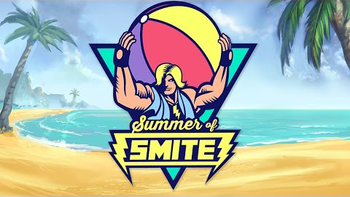 Several summer/beach themed Cosmetic Items were released over the course of several weeks. Acquiring certain number of these items would also unlock exclusive S.O.S. rewards, with the final reward being Star Slayer Anhur, a Limited skin that will never be available again. Additionally, every item purchase granted a random item roll, including exclusive skins, voice packs, avatars and more. A portion of the proceeds from Summer of Smite contributed to the prize pool for SMITE Pro League S2.

These are all the Summer of Smite items that were available during the event. These items could only be directly purchased during this event and have now been removed from the store.

These are the exclusive rewards that could be earned by unlocking certain number of Summer of Smite items.