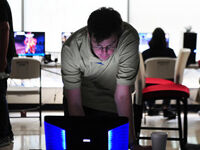 Stewart Chisam is President of Hi-Rez Studios. Chisam joined Hi-Rez in 2008. He led the teams that initially created Tribes and SMITE, before taking the President role in 2014. In January 2019, he was named CEO, taking over from Erez Goren, the company's founder, majority owner and Chairman of the Board.

Prior to joining Hi-Rez, Stewart spent 12 years in the enterprise software space. As Chief Technology Officer of BlueCube Software and subsequently Senior Vice President of Technology at RedPrairie Corporation, Stewart built the global hosting and support operations for a software as a service merchandising and workforce management solution used by many of the world’s largest retail and hospitality companies. At Radiant Systems, Stewart served in a variety of senior technical roles as the company expanded globally and grew from under $30 million in annual revenues to over $150 million.

Stewart holds a bachelor of arts in Economics from the University of North Carolina in Chapel Hill.