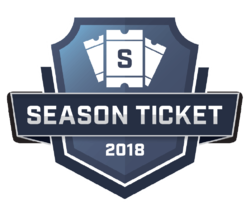 The SMITE Season Ticket 2018 was a special event that lasts for the whole Season 5 of SMITE eSports. For its duration, players will be able to earn

Fantasy Points (FP) by winning matches. This FP can be spent to unlock skins. Collecting enough of these points will award exclusive rewards such as skins, avatars, global emotes and more after reaching certain FP milestones.

The Season Ticket will have 3 splits: Spring, Summer and Fall. Players can purchase the Season Ticket Bundle for a split, which will grant access to the Fantasy League where players can vote for which Pro teams they believe will win each tournament. Guessing correctly will grant 30

. Apart from that, players will also have access to exclusive quests that will grant them 500 FP per quest. The bundle grants a boost to FP gain, Team Skin boosters (which allows the user and their teammates to use any non limited nor mastery skin for that match) and a special skin exclusive to that split.

The cost for these Season Ticket bundles is 400

These are all the current rewards from the Season Ticket 2018 earned by collecting enough Fantasy Points.

Players can complete these quests to receive Fantasy Points, which are used to gain levels and unlock rewards throughout the span of the 2018 Season Ticket.

Quests must be completed in order. Players must finish the first quest to unlock the next one.

Quest progress is only awarded to players who bought into the respective 2018 seasonal passes.

This Season, players will also be able to spend their Fantasy Points for more items. The Fantasy Points store allows you to unlock rotating Chest Exclusive skins or the exclusive Season Ticket Color Variants of some of you favorite skins. Spending fantasy points won't affect the progress made for the rewards. Any unspent fantasy points by the end of the season will dissapear.

These skins will be available only in this patch. Also, you can see the previous and future skins available in the Season Ticket Store.

These skins will be available all season 5 of SMITE.

Team Badges are a great way for players to start Season 5 by showing their support for their favorite SPL teams in the form of cosmetics. A portion of each Team Badge sold goes directly to that team and to the esports prize pool for the year.

The cost for these Team Badges bundles is 500

Also, you will earn 40 Fantasy Points for each owned team win.