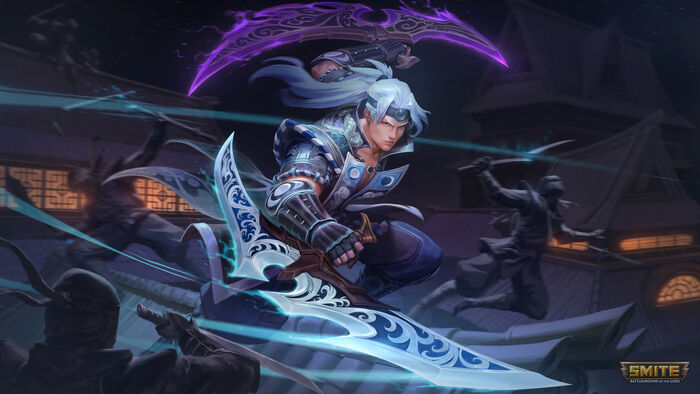 Tsukuyomi calls upon Shingetsu, summoning forth a Dark Moon Shuriken. The Shuriken damages enemies and stops on gods, sticking into them. If Tsukuyomi gets close to the god he retrieves the Shuriken and reduces its cooldown. After casting this ability Shingetsu's next Basic Attack becomes ranged. This attack steals Movement Speed from the enemy hit.

Tsukuyomi holds Mangetsu aloft as it erupts into starlight, sending stars falling to the ground. As they land they become Caltrops, damaging enemies in the area and slowing them for 2.5s. Enemies who move inside this Caltrop field take damage and are slowed again. After casting this ability Mangetsu's next Basic Attack becomes ranged. This attack deals bonus True Damage.

Tsukuyomi channels the power of the Full Moon, gaining Crowd Control immunity and 50% Damage Reduction. He fires forward 4 powerful piercing beams of moonlight. Enemies hit, take damage and become marked. Each beam can hit up to 3 enemy gods. After firing all beams Tsukuyomi charges forward at light speed, dashing through all enemies in the order they were hit, dealing heavy damage. Tsukuyomi will end his dashing at the final enemy hit.

Please note that these dates are tentative and subject to change

Balance Live with the God of the Moon Update August 11 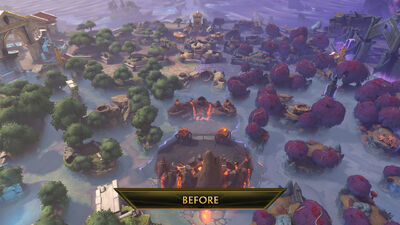 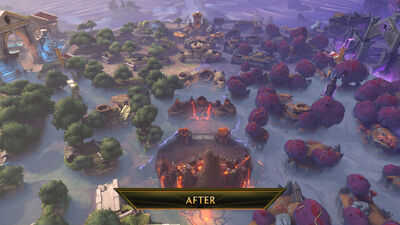 “Recently, We have seen a lot of discussion around the Masks. These items provided opportunities for class shifting but were nerfed when their goal was realized. The masks ended up creating some unique balance problems that we have since adjusted on gods' base kits. We want to bring power back to these masks where it makes sense, increasing their perks or decreasing their negatives to encourage exploration with these items.

The only exception is Bumba's Mask. Movement Speed is a dangerous stat to have too much of, and players tend to perceive this item as frustratingly strong or totally useless. What this means is that by the time it is considered good, it is likely breaking things at a fundamental level. Rangda's Mask and Lono's Mask have room to be good without causing this problem. We are removing Bumba's Mask for now, but we hope to return it to the game with a new and more unique design within a few updates.”

“Stone of Binding is an interesting cheap item for Supports, looking to be more aggressive with their setup. A boost of MP5 encourages more ability usage and makes it a more enticing choice for ability heavy supports.”

“Tankiness is something we are watching closely. From our own internal metrics to player feedback we want to ensure that building defense feels meaningful. The soft adjustments to items like Spear of the Magus, Heartseeker, and Soul Reaver should help tanks feel better, we want to ensure existing Tank options feel impactful. Reinforced Shoes and Greaves are rarely used and are a perfect place to bring some additional strength to tank roles.”

“Achilles was heavily nerfed a short while ago, and the Mid Season meta adjustments only served to hurt his metrics even more. He now seems to struggle in most Solo Lane matchups. We are boosting Shield of Achilles' base damage to help him better clear and poke in the laning phase.”

“Athena tends to be a solid option in competitive play but more on the fringe everywhere else. Her Ultimate, Defender of Olympus highlights skilled Athena players, and we want to better reward Athena players who really know when to help their teammates caught in a bad situation.”

“Awilix has moments to shine but even in strong matchups she struggles, and Mid Season seems to have taken a toll on her power. Awilix is getting some help in both managing her playstyle (with a reduced mana cost burden) and in direct power (Feather Step Base Damage). Additionally Suku has learned to strafe more effectively making it easier to position during combat.”

“This big boy is a perpetual meta pick in Non-Conquest game modes, with his ability to mitigate and dish out serious damage. He still is struggling in Conquest, though, even with his changes to Chug last year. We are increasing his Belch base damage back to a previous value to help him better compete vs other Duo Laners.”

“Similar to Isis, her rework released strong but with multiple nerfs she is now struggling to make an impact. Pounce's scaling gives Bastet the extra kick she needs late game and should help her succeed in her Assassin role.”

“Cabrakan has not seen much play for a long time. While we meme him as Fat Loki, he struggles as a Guardian and even when going damage it's difficult to really lock down opponents. Seismic Crush will now be a consistent 1s stun, giving support Cabrakan a consistent moment to play off of and lessening the diminishing returns inherent in his abilities. Tremor will also no longer cause minions to spiral around, making it easier for Cabrakan to group minions for himself or his teammates for clear.”

“Everyone's favorite voice pack can be a solid god pick, but never quite a top pick. Mid Season 7 is no different for Chaac. Rain Dance brings unique area control, attack speed debuffs, and self sustain, but its cooldown made it very restrictive. A lower cooldown opens up additional options.”

“Cu Chulainn is another god that was able to leverage Gladiator's Shield really well. With multiple abilities to trigger it, he gained bonus sustain during teamfights. We are lowering the cooldown on his primary poke to give him more options during extended fights.”

“Isis had a strong few patches during her visual rework, but with repeated nerfs she has fallen out of favor. The Spirit Ball change was likely a nerf too far, so reverting this should place her in a healthy spot.”

“Warriors have seen many adjustments in recent patches, with many changes to their itemization. We are bringing up some Warriors that we have seen struggle more directly with these changes. We expect that over time many different strategies will be figured out and will be responsive to these shifts.

Osiris heavily relied on low cooldown spam with Gladiator's Shield to sustain himself. While he still bullies the early game we wanted to give him better utility during teamfights. Judgement Tether will now provide some additional damage reduction to enemies tethered.”