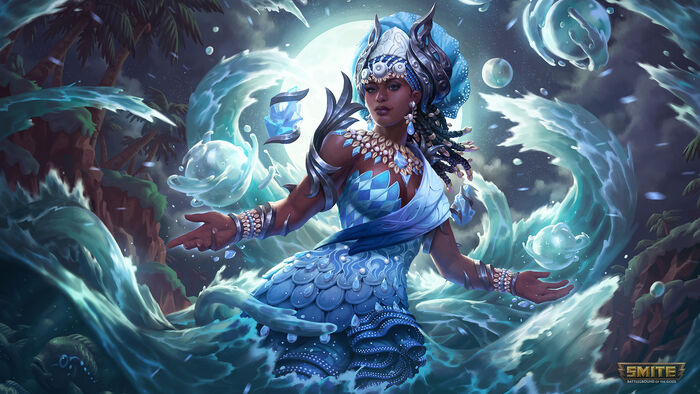 Yemoja's abilities do not cost any Mana and only her Ultimate has a Cooldown. Instead Yemoja uses Omi to cast spells. She starts with 7 and is able to earn up to 3 more. Yemoja gains 1 Omi (+.01 per level) every 5 seconds and Cooldown Reduction increases Omi regeneration. Yemoja's Basic Attack healing only affects gods and does not proc item effects.

Yemoja's Basic Attack Projectile hits allies in a larger radius and passes through them, stopping on the first enemy hit

Yemoja tosses out a bubble that bounces twice, dealing damage and slowing enemies by 30% before exploding into smaller bubbles that deal 50% damage. Enemies hit by both bubble bounces take 50% damage on the second hit.

Yemoja calls upon the Moon to deal damage to enemies below. The inner strike is the largest, dealing full damage and stunning all enemies and enemy structures hit.

Yemoja sends out a wave of water that damages all enemies it passes through, dealing extra unmitigated damage to their shields. Once the wave reaches an ally it bounces to all nearby allies healing and shielding them for 3s.

Yemoja creates a water ring that Knocks Up everyone that enters it. Allies are pushed further and gain both Movement Speed and Protections for 3s. Enemies go a shorter distance and are Slowed. After entering a ring you are briefly locked out of entering another. Yemoja can place the ring at a maximum distance to reverse the direction.

Yemoja unleashes her full power creating two large walls of water that block enemy movement and projectiles. After a delay the river cascades down, damaging, trembling and slowing enemies. Yemoja gains a buff to her Omi regeneration while she is in the river field that lingers briefly after she leaves it.

“Players often pointed out that we were forgiving TP loss on certain matches, but you still gained or lost MMR. MMR is a mathematical calculation and it relies heavily on one principal: For any amount of wins, there is an equal amount of losses. We cannot “forgive” MMR for only certain players or certain teams, without compromising this system. So we will be implementing MMR forgiveness when early surrenders occur, but the result will be that no players on either team gain or lose any MMR. The match is negated entirely as far as MMR is concerned.”

“Encouraging positive player behavior is a constant priority for the SMITE dev team. We want to create a competitive, yet civil environment for our players and make sure that player to player interactions are as healthy as possible. In this update we are adding a series of features for players as well as our dev teams to allow us to better combat toxic activities. We aim to do this by focusing on keeping chat clean and adding better tools and tracking for our support team.”

“We will be implementing a new form of punishment with the primary goal of protecting the average player from harassment. Shadowbanning will happen mid-match and automatically based on a set of specified conditions. We are not detailing these conditions publicly because we don't want to give players enough info to circumvent it. This will allow these players to continue playing, but remove their ability to chat.”

“This next feature is similar to Shadowbanning in many ways. It is also applied mid-match and automatically based on a set of specified conditions but generally for less extreme cases. This punishment will notify the player that they triggered the punishment in the hope that they will improve their behavior to have the restrictions removed.”

“This feature has existed for some time but we are greatly increasing its applications. We have a detailed system that tracks each players actions in game and flags them for a variety of negative behaviors. This feature will now be used to automatically tie a detailed list of the players negative behavior to any report. This should save our support team a lot of time, and should ensure that toxic players get banned more quickly through reports, and should ensure that players who are falsely reported are much less likely to be banned.”

“As a note for all balance changes in this update: This is the update that the World Championships at Dreamhack will be played on. This update will release in early October, giving pros a full month to prepare in that environment. Another update will be released around the time of Dreamhack, but it will not be used for the tournament.”

“There has been a lot of discussion about the impact of junglers in conquest, especially in the early game. With worlds quickly approaching we don't want to implement any extreme map changes for force a meta shift, so instead we are giving Junglers a slight buff to their starter item to help it better compare to other roles at the start of a match.”

“Blackthorn Hammer is a staple for Bruisers, giving a large amount of early health with some offensive stats. At 2000 gold most gods could rush this and see a large benefit without much opportunity lost. We are increasing the cost to keep it as a cheap bruiser option but slow it down to give other builds time to answer.”

“This item made a lot of noise when it was reworked last update. We have seen a lot of differing opinions on the item and after a few fixes it seems to be having the intended impact. It allows Assassins to have a bigger impact in the later stages of the game. This item is seeing a slight nerf to its cost to make sure it is clearly positioned as a late game item.”

“The best looking warrior on the battleground is back and looking better than ever. There was a lot of disappointed fans when his basic attack range was nerfed for balance and artistic reasons earlier this year. Those Achilles fans can now proudly cheer on their hero again as his range is returning with some adjusted animations to match.”

“The God of Decay is often seen as a niche pick against healers due to the way Last Breath (his 3rd ability) functions. For a god who has a specific counter-pick function, he wasn't actually doing much to counter. We are adding even more healing reduction to his kit to go alongside the amount in his Ultimate and Last Breath's stun. This should make Ah Puch a clear healing counter-pick regardless of meta shifts.”

“Kukulkan is one of the most beloved gods in SMITE, but he rarely ventures into more competitive play. Kukulkan often feels excessively slow and squishy those base stats are being increased. His Whirlwind often feels sluggish or confusing as to when it will actually apply to enemies, so that process is being sped up and having an initial hit applied to make it more impactful.”

“This update continues with a series of changes to Persephone. Many of these changes are to address player feedback on her clarity concerns or bug fixes, but there are important balance changes too. Persephone has had relatively low win rate in all normal modes, but she is hotly contested in the pro league. She is seeing some adjustments here to make her performance more consistent. She will now be limited to a much smaller number of plants in the early game and Bone Rush will now have a slower and more clearly telegraphed hit area.”

“Raijin has had flashes of excellence in the Season 6 meta but they are few are far between. In a previous round of nerfs Raiju saw a significant damage reduction to decrease his lane clear and poke. We are partially reverting to a number in between the two limits, which should make him a better Mage option without pushing him over the top.”

“Kings are being slain left and right by Set, especially in the pro league. Set is a high risk high reward Assassin, but the dominant strategy has become full-tank Set. We are decreasing the base values while increasing the power scaling for both the damage and healing of his Ultimate ability. This will require players to build more like a true Assassin to reap the same rewards of this ability.”

“Sobek has been carefully lurking in the waters, waiting for his time to strike. After he put up an impressive record in the pro league last year he was nerfed, primarily due to pro frustration. We are happy to finally buff the ol' croc, ideally in a way that pushes him more toward support. We also feel that this is safe now that solo lane has become more aggressive and Warriors have more stable footing, if he does end up back in Solo.”

“No one is above the law. After multiple buffs that seemed impactful, Tyr has still struggled to find a place in the meta. So we are doing a big revert back to Tyr's glory days. Fearless in defensive stance is having its knockup returned! This should allow Tyr to continue pressuring enemies and setting up for his team, even if the offensive Fearless combo fails.”

“Xbalanque was defining the meta for most of the year, but a big change to his ultimate has brought him to a more reasonable place. His blind is weaker yet still a valuable asset to teams, but the community helped point out a strange weakness in his kit. Poison Darts slows for surprisingly small amounts until it's ranked up. We want each ability to feel impactful and so the slow is being boosted on the lower ranks to ensure Xbalanque can follow up after this ability.”