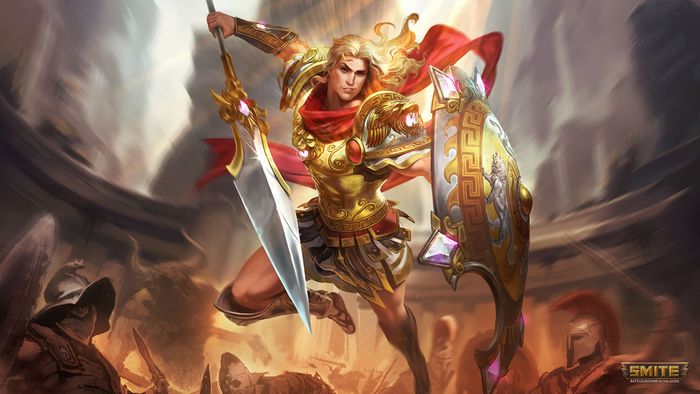 Gift of the Gods (Passive)

Achilles adapts to the tide of Battle. Achilles can choose to wear armor, granting him bonus Health and Protections, or forgo it, granting him bonus Movement Speed and Physical Power Armored Bonus: Achilles gains an addition 35 +10 Health per lvl and 5 +1 Protection per lvl. Unarmored Bonus: Achilles gains an addition Movement Speed 3% +.25% per level and 10 +2 Physical Power per level.

Achilles punches forward with the edge of his Shield, inflicting massive damage and stunning enemy targets hit by the impact. The force of his punch continues to radiate past his initial target area, dealing 80% damage to targets farther away.

Achilles is blessed by the gods, giving him bonus Physical Power, Protections, and Crowd Control Reduction for 6 seconds. While this blessing is active, Achilles will heal himself upon successfully damaging enemies with abilities.

Achilles dodges his enemies' attacks before striking them in swift response. If Achilles successfully hits an enemy god with this strike, Achilles can use this ability once more before it goes on Cooldown.

Achilles winds up a large attack and dashes forward. While dashing, Achilles will pass through minions, stop and hit the first enemy god he encounters, dealing damage to all he hits. If the god is below 30% Health they are Executed. If Achilles successfully Executes a god with this ability, he can use it again, up to 5 times.

As Achilles successfully Executes his enemies, he becomes more reckless in combat and leaves his heel exposed. Achilles will become more susceptible to damage, stacking up to 5 times.

“Soul Gem's Passive has been redesigned to make its' interactions with god abilities more consistent. Gods can successfully hit a target with an ability (including non-damaging abilities) to gain stacks. However, stacks will only be consumed and trigger the bonus effects on damaging abilities.”

“Typhon's Fang allows Mages to build into heavily lifesteal strategies. This option can be powerful, but we want to make sure it comes with the cost of other utility stats. At 15% base lifesteal and 50% bonus healing, Mages could build a single lifesteal item (Bancroft's most often) and gain large benefits. By reducing the lifesteal and bonus healing on this item, players will need to invest more into lifesteal to get similar amounts of sustain.”

“Warlock's Staff has become a dominant choice for Mages that provides early game power, mid game survivability, and solid power scaling into the late game. We are reducing the early power and scaling power it gains, focusing its identity as a solid survivability foundation for Mages.”

Book of the Dead

“Book of the Dead provides a powerful effect. Mages can heavily increase their chances to survive with this single item. We want to preserve the item's identity, but we have seen this effect provide too much shielding in most gameplay scenarios.”

“Malice and Deathbringer have often been a complicated math problem to determine which item was superior. We are redesigning Malice to focus more on ability damage characters who like to build Critical Strike Chance. As players accumulate Critical Strikes they begin to empower their next ability with a large boost in Physical Power.”

“Soul Eater struggles to get online quick enough and lacks a punch when fully upgraded. We are reducing the stacks needed to evolve Soul Eater while increasing the Physical Power it gains from being evolved.”

“We have seen a lot of experimentation in the Solo lane and Warrior's Blessing is slightly underperformed compared to different starts. That is, unless a kill occured in lane. We are bringing up the reward for evolving it while reducing its potential to suddenly spike in stacks with a single kill.”

“In previous Seasons, Arachne excelled at controlling the jungle by killing tougher camps that spawned less often. With the quicker respawns of Season 5 this strength has been diminished. We are reducing the cooldown so they can help her clear camps more often are also increasing the amount of Webs she can have active to give her more opportunities to use them in clever ways.”

“Cerberus has struggled since his release to really make an impact for his team. We are increasing his ability to deal damage, engage, and giving him the ability to attack his enemies that are caught in Stygian Torment immediately. Additionally, Stygian Torment will activate all of his heads, allowing him to combo more directly with Paralyzing Spit.”

“Freya has taken off with the changes in Season 5, specifically around her itemization and the overall pacing changes in the Conquest map. While her early game is weaker than most, it isn't weak enough to offset her powerful late game. We are reducing the amount of Sustain she can provide herself in the early and mid stages of the game while reducing the top end damage of Irradiate. Players should have more opportunity to punish her in the early game and the late game respectively.”

“We are taking a closer look at Guardians now that Season 5 has settled down some. Khepri is the first Guardian we will be adjusting and surely won't be the last. Khepri has been nerfed many times since his release but in Season 5 he has hit a new low for performance. We are giving him slightly more mobility by reducing Abduct's Cooldown. We are also buffing his clearly least impressive ability, Solar Flare, that had a strangely high cooldown.”

“Similar to Vulcan from last patch, Scylla is a late game mage who suffered from the removal of Rod of Tahuti and continues to suffer with the new itemization. We are bringing up her Passive's Magical Power to help her scale into the late game while also boosting Sic Em's scaling by a small amount. These changes combined should help Scylla feel even more impactful in the later stages of the game, offsetting her rough early game.”

“Serqet has been a powerhouse in the new Season. Her high clear speed and low cooldown mobility made her difficult to outpace in both levels and in raw power. We are increasing the cooldown of Deathbane while reducing the Physical Protection shred she provides. Using Deathbane for damage vs. mobility is now a tougher choice and enemies will now have a larger opportunity to counter her while it is down.”

“When Ullr was initially buffed in Season 4 we brought a god who had been mostly unplayed to a much better position. We removed his clunkiness and allowed more players to perform with the God. There was a lot of discussion about the God at the end of Season 4 but his metrics never really reached a “must nerf” scenario. With many more changes upcoming, we wanted to wait and see how successful he would be in the new Season before making any changes. We anticipated that he would drop naturally. When Season 5 launched we did see his performance clearly drop, but this was likely a result of the rise of Crit Hunters in the meta. Many other factors could have played a role in this so to confirm his power level we waited to see the results after the last round of changes that specifically adjusted Deathbringer. Ullr did indeed rise back up in his stats, suggesting that Season 5 did not nerf him naturally as much as we expected and solidifying the fact that he was in need of a nerf.

Ullr is still a difficult god to execute well, and sees much stronger numbers at high skill levels than in the general population. He just seemed to do too much damage which covered up this aspect in most cases. Bladed Arrow and Hail of Arrows are both seeing a 10% reduction in Physical Power Scaling. The burst provided from these two abilities was giving him so much pressure in lane. With these adjustments we expect him to fall more in line with other Hunters.”

“Vamana's performance in Season 5 has been lackluster largely due to enemies being able to shut down his main source of survivability in Teamfights. While the healing potential on Colossal Fury exists, the amount of Anti-heal options limit how useful he can be. We are increasing the base protections provided by Colossal Fury to better help him engage a team even if they have build heavy Anti-heal. In addition, Colossal Fury now has a targeter allowing players to see at what range Vamana is able to connect his basic attacks.”