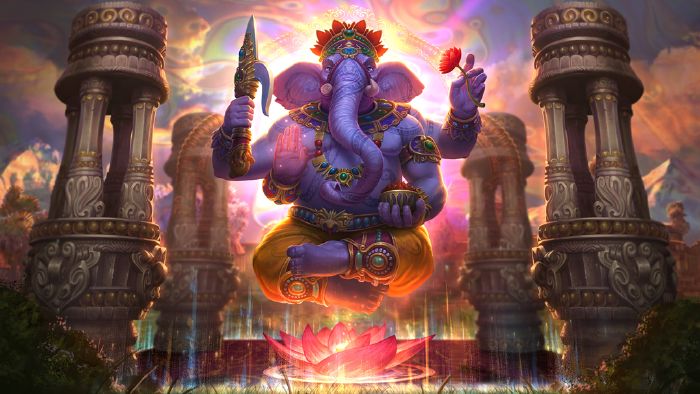 Upon killing an enemy God, Ganesha will instead give the nearest friendly God the Kill credit and receive the rewards for an Assist. In addition, his Assist range is increased by 20 units and the duration for his Assists is increased by 5s.

Ganesha begins chanting and rises into the lotus position, where he is slowed slightly but allows him to travel freely in all directions. While chanting, he silences enemy gods in a cone in front of him and increases Physical Protections for all nearby allied gods. Cost: 55/60/65/70/75. Cooldown: 14/13/12/11/10s.

“The Spring Split is over and it is time to bring in the Summer Split! Ranked players will have their ratings soft reset and will need to qualify anew. Any players who were at the top of their god leaderboards or made it to Grandmasters will be receiving a nice Gem bonus once 4.7 hits.

In addition to the reset, Ranked is also seeing a few placement updates for the Summer Split. First, we have done a number of back-end adjustments to how we calculate a player's placement and what Division and Tier players receive after qualification. Getting to Diamond and Masters will take more effort as a result. On the “About” page you will be able to see what % of players will make it to each Tier. Players will also be able to see how their TP is calculated at the End Of Match lobby so they can be more informed about how the system works. We are also updating our TP Decay system this patch. Players who play during the whole split will maintain their higher divisions, while those who play early on and stop will drop in placement.

We also have improvements to the Picks and Bans process. Previously only the top rated player would be first pick while the rest were randomized. The top two players will now be the first two picks. This will give players more control over their initial few picks which is key in a Ranked environment. To further help teams draft appropriately, players can now pick from any God they own regardless of Mastery count. You will still need the same amount of gods Mastered as always, but you will now be able to draft that Khepri for your support player even though you didn't master him.”

“Frenzy makes a return! Belt Of Frenzy can provide a strong increase to your team's damage on objectives or in teamfights. It now also increases Damage dealt rather than increasing player's Physical and Magical Power, giving it more impact to everyone on your team.”

“At 150 seconds and without additional utility, Cursed Ankh struggled to find use even against high healing team comps. We are significantly reducing the Cooldown on its base and upgrade form. Players who use a relic slot to shut down healing will be able to do so more often.”

“Meditation Cloak's heal had high variability in its strength. It worked on the Caster's Maximum Health which caused it to perform too well on certain characters and a bit weaker on others. By changing Meditation's heal to work on a flat number that increases with level, we can better control the strength of this Relic moving forward.”

“Sundering Spear and its upgrade has been taking up players Relic slots as both a fun and very viable choice. After a few months of Season 4 we are seeing the Upgrade provide a bit too much damage. We are reducing the Damage Increase debuff and increasing to Cooldown slightly to bring it more into line.”

“Joining the ranks of Bumba's Mask and Rangda's Mask, we now have Lono's Mask. This 500 Gold Starter Item is tailored towards support players who want to sacrifice some early Gold for a payoff in the future. By getting Assists on Minions or Jungle Monsters players will earn a stacking buff to max Health. Once all 75 stacks have been completed, the holder of Lono's Mask will receive a 400 Gold bounty! We are excited to see how this new Mask shakes up players starting builds and playstyles.”

“Blackthorn Hammer has a very powerful but situational Passive. Without strong core stats to back up this item up it never saw play past initial experimentation. With increased Health this item will provide enough defenses in addition to the unique passive.”

“Runeforged Hammer is meant to give Warriors a strong way to increase their damage and survivability at the same time, assuming their team has a way to activate the passive. In practice, it has not provided enough for players to reward players for finding the right situation to build it in. We are increasing the Health and Passive strength to better reward those players.”

“Gladiator's Shield is a cheap source of sustain and defenses during the laning phase. As an early game bridge item it wasn't providing the spike needed for players to build it. We are pushing it up slightly to encourage building this item when the situation calls for it.”

“Rage underwent a redesign at the start of Season 4 to make it a cheap source of Critical Strike chance with a potential higher payoff. Unfortunately, the playstyle didn't synergize with standard Critical Damage builds and players often skipped building it. In 4.7 Rage is receiving a new Passive.

Rage still requires kills or assists to receive a bonus, but the bonus now provide players with Permanent Stacks of Critical Strike Chance. Additionally, players who achieve max stacks will see a large spike in their damage output. Players who want to really invest for the Late Game will feel at home with this item.”

“Stone of Binding currently triggers on Hard Crowd control effects. This often meant Support players who picked it up had only one or two ways to trigger the passive at best. We are changing it to now work with any Crowd Control (similar to Runeforged Hammer) which will give gods many more ways to keep this passive effect up during a fight. Ymir for example will now be able to trigger this using three of his abilities rather than just one.”

“Ao Kuang, Izanami and The Morrigan are all receiving a change to their stealth mechanics. While they both drop minion aggro, a stray arrow could instantly cancel the stealth effect and limit the use of these skills. These characters stealth will now only break from non-minion damage.”

“Awilix often runs low on mana early, leaving her being less aggressive than she otherwise could be. We are lowing the mana cost on one of her primary poke and engage tools to better enable her in the early game.”

“Cabrakan has seen a large amount of competitive play since the start of Season 4. His strength comes from his ability to quickly clear the first minion wave before pressuring the enemy solo laner and their jungle. We are reducing his Tremors damage to slightly increase his clear time on the first wave while also lowering his base protections. This will give enemy solo laners more time to also clear the wave and get more damage onto Cabrakan.”

“Camazotz is a high sustain assassin who needs to recover health to stay in a fight. On his release we were concerned that being able to drink in combat would give him too much potency. Since he limits his movement severely to heal up, we feel the tradeoffs of running to it and standing inside the pool during combat should allow him to heal at the full rate.

Devour is also seeing a timing change that will help it feel more consistent in avoiding damage. Devour had a small warmup where he could still be damaged or crowd controlled before becoming untargetable. He now becomes untargetable instantly as this ability fires. This will help Camazotz avoid damage when he uses Devour at the right time.”

“Cernunnos and his team have had a blast hunting down all his polymorphed opponents. The size of the ultimate allowed him to cover a wide area and allowed for little counterplay for his opponents. We are reducing the radius of The Wild Hunt to make it a bit less wild for his enemies.”

“Hun Batz received many indirect buffs in Season 4. From small meta shifts and item builds, along with his strong teamfight, he has quickly risen to the top of the Jungle. More specifically his early clear and boxing power has increased allowing him to bully and gank his enemies very effectively. We are reducing the slow on Somersault at lower ranks and increasing the Cooldown on Fear No Evil to give players more opportunities when fighting the Howler Monkey early on.”

“The Nene Kappa is a serious threat in the early stages of the game but seriously falls off as gods get more and more damage. Hunters will often be able to blow it away without significant trouble. Kuzenbo will now share 20% of his Health and Protections making these little Kappas requiring more effort to play around.”

“Universe Ring Toss is Ne Zha's primary form of wave clear, jungle clear, and poke. As a characters who is currently struggling, an additional bounce will give him additional power at all stages of the game.”

“As a utility and lock down mage, Nox can bring a lot of control, disruption, and surprising burst to the table. However, her requirement of comboing her abilities can lead her to falling short when it comes to helping a team fight. We are reducing the cooldown on Night Terror to give Nox the ability to contribute to fights more often with the damage debuff and burst that this ability provides.”

“Hydra's Lament allowed high skill Susano players to get a large damage increase through in-hand cancelling. This has caused a large disparity in performance when comparing pro players and the average player. We are removing this specific item-skill synergy to nerf Susano at the highest levels of play while leaving his average performance intact (and keep multiple fire abilities consistent across the board).”