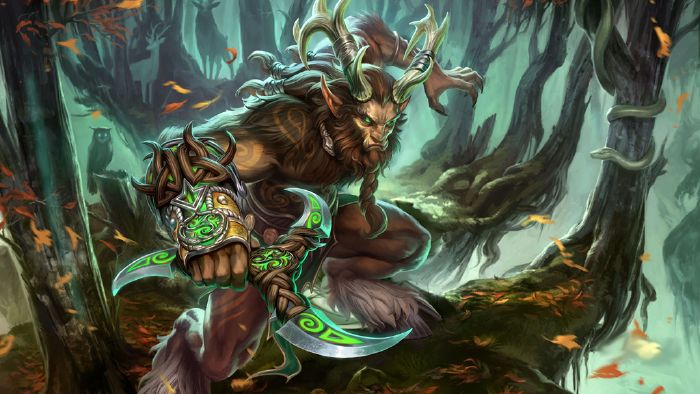 Cernunnos wields a Glaive as a weapon. His basic attacks deal additional damage to all enemies in melee range while he is throwing it. The additional damage from Heavy Throw does not proc any effects from items or abilities.

Cernunnos imbues his glaive with the power of the 4 seasons. Activating this ability rotates him through 4 different bonuses to his basic attacks.

Cernunnos fires a bramble forward in a line that roots a single enemy hit. Upon hitting an enemy, wall, or reaching max range it will explode dealing damage and spawning an area of brambles at the location. This area deals damage every .5s and slows enemies inside it, and persists for 5s.

Cernunnos charges forward, damaging and crashing through all types of enemies.

Cernunnos selects an area where The Wild Hunt will begin. After a 1s delay, enemies in the area will be damaged and Polymorphed into wild boars. Polymorphed targets are silenced and disarmed. Polymorph is not affected by diminishing returns.

“Bancroft's is a high risk/high reward item when it comes to maximizing the damage it can provide. In 4.4, we are increasing the Lifesteal provided by the item and its Passive to better enable this risky playstyle.”

Book of the Dead

“Book of the Dead allows Mages who want to focus on Lifesteal access to bonus Health. However, the power of other Lifesteal choices combined with the cost left this item feeling underwhelming. We are reducing the cost and bringing up the Lifesteal to help this item be a viable option for a Lifesteal playstyle.”

“Before Season 4, Hastened Fatalis was seen as a fun item that was not strong enough to be competitive. With added Penetration, it has become a serious contender for many classes and gods and in some cases provides too much strength. We are slightly increasing its cost to better reflect its new power.”

“The new Ritual Consumables introduced in Season 4 have had a powerful effect on SMITE, and we have been quick to adjust them as their power has been proven. Flickering Ritual is now seeing an adjustment that is a bit different than the others. Flickering has very little room to adjust its strength without adding additional effects, systems, or limitations. We are increasing its cost to 1000 Gold, increasing the risk/reward that comes with picking up this Ritual. We will be watching this change closely and will investigate other potential solutions if this change does not address the strength of Flickering Ritual.”

“Heartseeker provides stats that most Assassins and Warriors love and has a Passive that helps them scale better into the late game. At 2100 Gold, this item was providing a lot of that power too quick quickly. We are increasing its cost to 2400 to place it more in line with other comparable options like Jotunn's Wrath.”

“Apollo rose to the top of everyone's list at the start of Season 4. As the meta has stabilized, Apollo fell from being the most dominant pick but he is still over-performing. His early clear with So Beautiful and superior boxing ability from Serenade's protections are both seeing a slight downward adjustment to rein him back in.”

“In the last patch, we made a few adjustments to Kuzenbo's overall feel and are now looking at other ways to give him strength, especially in the late game. NeNe Kappa is Kuzenbo's primary damaging ability, allowing him to impact the fight when his Ultimate and Sumo Push are down. In this patch, Shell Spikes will reduce the Cooldown of NeNe Kappa much more, giving a properly positioned Kuzenbo access to increased damage and disruption.”

“Odin's Ring of Spears, Serqet's Last Breath, and Osiris' Lord of the Afterlife are ultimate level abilities that were intended to prevent all healing, but functioned in different ways and had conflicting descriptions. All three abilities stated they reduced ALL healing in their description text but both also said they reduced healing by 100%, which are different effects.[?] To add to the confusion, Ring of Spears was properly preventing all healing but Serqet's Last Breath and Osiris' Lord of the Afterlife were only reducing it by 100%. We have updated these abilities to now reduce ALL healing and their descriptions have been updated to reflect this.”

“Sylvanus has rooted himself in this meta, providing strong early game pressure in the duo lane. Part of this strength comes from Verdant Growth allowing Sylvanus to clear and engage his enemies often. We are increasing the Cooldown at Rank 1 of this Ability, lowering Sylvanus' power during the first few levels.”

“Late Game Hunters are notoriously sensitive to balance adjustments. When looking at Xbalanque, who was under-performing, we wanted to make sure we didn't push him over the edge and instead gave him a few tools to better enable him to reach late game. Branching Bolas is getting an early Mana Cost decrease to give him cheaper wave clear, while Rising Jaguar is getting an increase to make his damage combo more threatening.”

“Zeus has seen quite the resurgence on the Battleground of the gods. His ability to clear early with Aegis Assault and use it to threaten further damage helps him to bully his opponents in lane for an early lead. Aegis Assault will now deal less damage when it is deployed to tone down this early game pressure.”

“The Demon Queller is gaining more control over his damage and utility this patch. First, the Demons from Exorcism and Recall Demons now move quicker. This will help Zhong Kui feel more responsive and lower the window that enemies can react to chasing ghosts before they get hit.

Expose Evil will also now deal 75% of its remaining damage when consumed by either Exorcism or Book of Demons. These abilities have strong additional effect, but often losing the long duration slow and damage from Expose Evil left Zhong Kui in a worse spot. By getting some of the damage back, Zhong Kui players will be able to make smarter decisions about when to or when not to remove the card.”