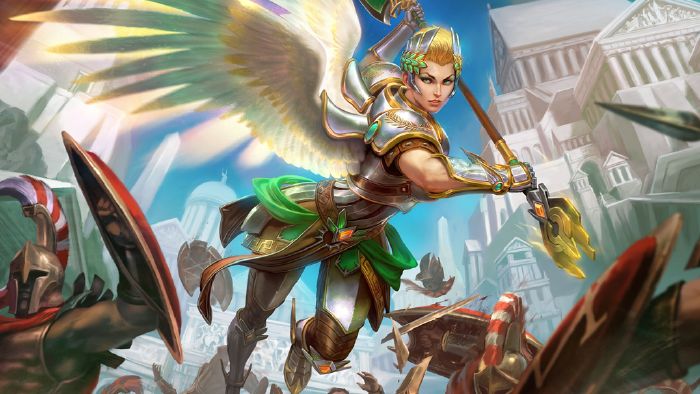 Nike sets three goals that the team can achieve to gain increased strength. Upon completing a goal, Nike's team gains a Laurel that increases Power (+8/10/12%) and Movement Speed (+3/5/7%). This Laurel can increase up to 3 times. 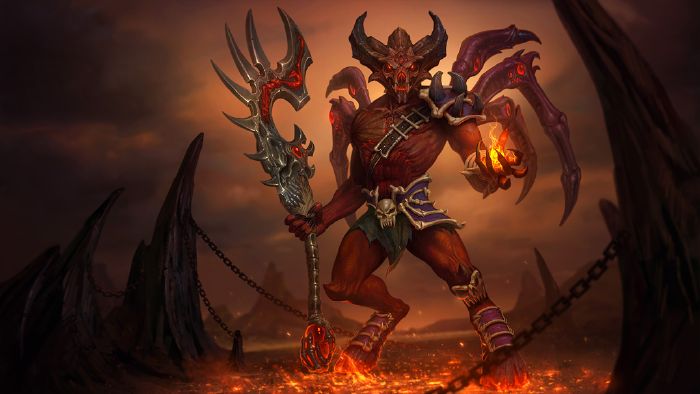 The culmination of the 2017 Odyssey has arrived. Chosen by the Community, the Demonic Pact Anubis Tier 5 skin is here! As a tier 5, it comes with a horde of features.

“Earlier this season, this item received a large buff to Protections which seems to have been an over buff as it sort of became a catch-all item. We are bringing its Protections down slightly so it lies between the 2 stages and increasing the cost slightly to better fit its power level.”

“Hydra's Lament has found a strong place in players builds since it received the Mana regeneration passive. The Cooldown Reduction this item provided was very potent for the cost and power of the item on its own and is being toned down a bit to make sure Hydra's isn't overshadowing different build options.”

“Mages actually have a very strong penetration option in Spear of the Magus but for most of the Season, it was overshadowed by Obsidian Shard. The raw power of Shard is being brought down a little to bring the items more in line with each other and encourage better situational building.”

“Erlang Shen has been a strong force in the competitive scene. One of his major strengths has been his ability to be offensive with Spot Weakness and defensive with his Turtle Form and his Ultimate. We are removing some of his free offensive power by removing the “Fatalis” effect from Spot Weakness and moving it to the Mink from on 72 Transformations. Now, the form Erlang Shen chooses will have a bigger impact on his play style.”

“Hades has been a popular point of discussion recently and has been a character we have watched for a long time. Overall, his performance is solid (and sometimes very strong) but we felt there were a few things we could change to help the King of the Underworld. Blight now lasts longer and Shroud of Darkness no longer knocks back minions. These two changes should remove some of the frustrating situations that can happen during the laning phase. Additionally, Pillar of Agony now provides more protections making burning Hades down in his Ultimate, a less viable strategy unless there is a significant source of damage on him.”

“Jing Wei has become one of, if not the most, dominant Hunter of Season 3. Her initial reception was that she was weak and she received many buffs, bug fixes, and quality of life improvements over time. Jing Wei now feels great to play, but the main issue with her is that she is too safe. We are nerfing the cooldown on Agility and reducing the Critical chance on Explosive Bolts to combat some frustrations of playing against her. Additionally, we will not be adjusting her Passive in this patch. We would rather keep her unique strength rather than remove or nerf it.”

“The Dawn Bringer was so dominant in Season 2 that he received a large number of nerfs and, given the new Season, these may have been too much. The new additions to the Guardian roster and the resurgence of some older gods in Season 3 has left Khepri out of the equation. His abilities are still quite powerful but his starting HP was well below other gods in his class. This is being brought back up to fit within the standard ranges of Guardian stats.”

“Nox's Passive was often extinguished by Minions and punished Nox players for taking advantage of a good opportunity just because Minions were still alive.”

“The Broken God of the Afterlife is finding a new way to use his unique fragmenting Passive in this update. Osiris has always been a high skill God with a lot of potential but he struggled in the late game so some Magical Damage mitigation is being added to his Passive.”

“Terra has made a name for herself through her ability to protect gods across the entire map. Especially when viewing her at competitive levels, The Earth Mother's ability to save allies across the map was happening a bit too often over the course of the entire game.”

“In the last patch, we gave Thoth additional positioning tools in the late game and then held on further changes to see how players learned to play the Arbiter of the Damned. After reviewing performance as more and more players learned him, the Final Judgement is that his is under-performing. We are making a few adjustments to allow for his damage to be more consistent while still leaving room for players to skillfully juke Thoth's attempts at dealing damage.”

“Tyr is ready to bring down the law. Change Stance will now work in the same manner as Hel and Ullr's stance switch, letting him use this at level one. Tyr players will now have more tools to work with in the first few levels without needing to sacrifice a skill point, opening him up for a lot more options.”