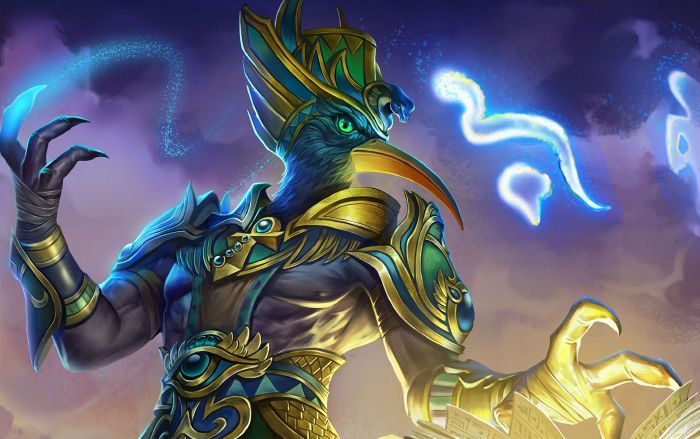 Thoth begins to gather magic from the air, ignoring the Basic Attack Movement penalty and conjuring 3 Hieroglyphs. His next 3 Basic Attacks pass through enemies and do Ability Damage (35/55/75/95/115 +25% Magical Power) instead. Cost: 60/65/70/75/80. Cooldown: 8s. If these attacks pass through the Glyph of Pain, their range is increased.

Thoth begins summoning pages from his book, up to a maximum of four. When all four have been summoned, he sends them forward damaging (360/440/520/600/680 + 140% Magical Power) all enemies in their path. Cost: 90. Cooldown: 75. Thoth may activate this ability again to fire the ability early, doing a reduced amount of damage based on the number of pages currently summoned. 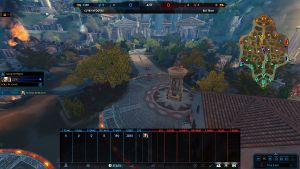 “Oni Hunter's Garb allows players to build up Magical Protection over time. We are strengthening this unique feature of the item so it can be more effective on players who maximize their combat timing. We are also increasing the Crowd Control Reduction stat to make it easier to contribute to capped Crowd Control Reduction builds.”

“Spirit Robe has become the type of item purchased by gods in all classes and roles. The true mitigation provided by the passive is a very powerful effect, so we are increasing the internal cooldown to allow for players to counter attack between triggers more during team fights.”

“Chiron has struggled a bit lately, but even the Great Teacher can learn some new tricks. Training Exercise is a versatile ability in that it can cleanse allies or damage enemies. Its Cooldown is being reduced to encourage using it in both ways. Also, the magic arrows of Centaurus have been sped up slightly to make the ability more useful against high speed gods or on larger maps.”

“Erlang Shen's ability to control his opponents with Pin was often too strong, especially once this skill was maxed out early. Pin will now Root and Cripple for 1.3s at all ranks, toning down his mid and late game while also allowing players to have a better understanding of how long the effect will last.”

“One thing we always want to ensure is that players can understand each ability and have good tells for when effects are about to end. Freya will now Banish for 1.5s at all ranks and has improved visual FX to help both allies or enemies react to the ability more consistently.”

“Hou Yi is an ability Hunter that is heavily influenced by when and how he uses Mark of the Golden Crow. Our goal for Mark is to augment and synergize with his other abilities, rather than just being used for a single combination (notably his 1). To emphasize this, we are increasing the potency of interaction with Sunbreaker. This ability now has a base slowing effect that gets even stronger when Mark is applied.”

“Kali's new passive allows players to select their target at the start of the game, but players learned they could quickly disconnect to cause the target to switch to a random target, negating the initial choice. After looking at various cases to solve this abuse case, we have decided to make Kali's passive now persist on disconnected targets.”

“Kukulkan's Slipstream is an ability we often receive feedback on. Overall, players felt like the ability had too high mana cost and was not effective enough. Slipstream now provides a lot more movement speed up front and then gets weaker over the 4 second duration. This allows the slippery serpent to react more quickly to enemy aggression. Additionally, this ability has a reduced Mana Cost which will encourage Kukulkan players to use it in the early game more often.”

“We made a large set of changes to Susano recently to help him not feel as frustrating to fight and wanted to see how these played out. While frustration went way down, so did his performance overall. We are looking to revert some of the previous changes that did not solve frustration issues, while continuing to look at fair ways to bring up his power level.”

“Monolith creates a long lasting zone of healing that can potentially become dangerous to enemies at any time. In this patch, Monolith will now be destroyable through enemy Basic Attacks, giving some more options for enemies to counter it.”

“Xbalanque's Mana Costs can be very punishing if not managed properly, even in the late game. With these changes the Hidden Jaguar will now have more freedom to cast and use his abilities. He will still blow through his Mana if he spends it needlessly, but players will have a bit more mana to play with when it comes time to commit to a fight.”