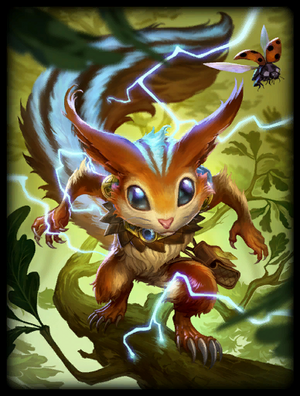 Ratatoskr spawns with a powerful acorn from the World Tree in his inventory. He can upgrade this acorn through the item store from anywhere on the map to strengthen himself and enhance his abilities.

Ratatoskr dashes in the target direction, dealing 70/100/130/160/190 (+40% of your Physical Power) damage to all enemies along the way. If Ratatoskr strikes an enemy god he has not struck with Dart in the last 10s, the cooldown is reset.

Ratatoskr spins, shooting 12 acorns out in a circle around Ratatoskr that freeze in air briefly then return to wherever Ratatoskr is currently, dealing 10/14/18/22/26 (+15% of your Physical Power) damage on the way out and the way back.

Through the Cosmos[edit | edit source]

Ratatoskr charges briefly then leaps from the ground to a branch above his head. He then jumps to a new branch twice more. On the third branch, Ratatoskr chooses a landing locating where he strikes down dealing 250/330/410/490/570 (+100% of your Physical Power) damage.

“Ratatoskr spawns with this acorn in his inventory. It can be upgraded but cannot be sold.”

View the Developer Insight to learn more about Ratatoskr's design and development process.

“Ah Puch's poke with Fleeting Breath at the start of the game is seeing a reduction, along with less duration on Empty the Crypts. While his performance overall is in line with other mages, he was succeeding slightly too well at zoning out enemy players.”

“Awilix, like Kali, will now have protections against Knockups, Slows, and Roots while Gravity Surge is active. This helps her stay in the fight even if she missed a pull on a jumping target.”

“Freya is seeing an increase to her base Protections and scaling to be a bit more survivable. Thank Odin's ravens.”

“Scales of Fate has had some cleanups to make the amount of Power Nemesis receives more accurate and reliable.”

“The Broken God of the Afterlife is getting some tweaks to his base and scaling defenses to put him better in line with the Basic Attack-centric god that he is.”

“Because it's a different weapon. For glory!”