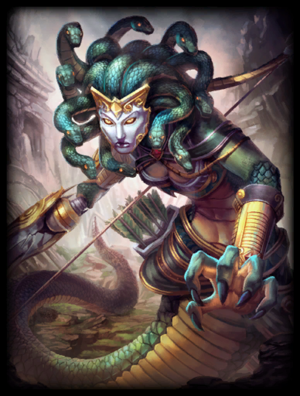 Medusa removes her mask revealing her true face, delivering a powerful blast from her horrifying Gorgan gaze. Enemies Take 300/400/500/600/700 (+100% of your Physical Power) as damage and are stunned for 2s if they are looking at Medusa. Enemies not looking at medusa take half damage and are slowed by 50% for 3s. Enemy gods that are killed by Medusa's gaze will turn into a stone statue and remain behind as a reminder to others. Cooldown 90s. Cost 100.

View the Developer Insight to learn more about Medusa's design and development process.

“With this patch we are starting an overhaul of the Clan system. Players in clans will now earn Honor, and clans will level up over time (outlined below). This is the first stage of the clan implementation, as we wanted players and clans to start earning Honor as soon as possible. In a future patch there will be achievements for players earning honor, as well as special unlocks for clans leveling.”

Shield of the Underworld[edit | edit source]

“Tusky underwent some obedience training, and Artemis is much happier for it. Artemis can now better control who Tusky charges at first.”

“The build up on Ricochet added more difficulty to this ability, especially considering the inherent difficulty of bouncing the shot for multiple hits and we want players to focus more on the ricochet itself. We've removed the build up, and Hou Yi can now more fluidly execute the attack.”

“Kumbha is getting a bit more love this patch, in the form of a small but significant change to using his Ultimate. While still covering the same distance, Epic Uppercut will travel much faster increasing the reliability of his ultimate charge.”

“The view from up above is quite magical, and occasionally even a warrior as stoic as Thor likes to take in the sights. This change just let's Thor know when it's time to get back to the killing. We are watching this quality of life change closely, and are considering adding the same treatment to other gods who take to the skies with a limited duration.”