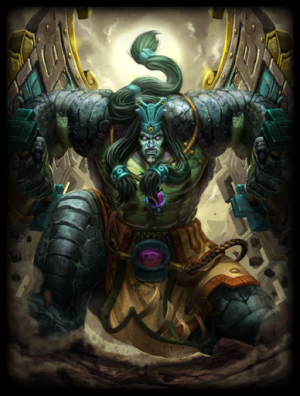 Allies in a 30 ft radius of Cabrakan take 5% reduced damage.

Passive: Cabrakan gains 15/20/25/30/35 increased protections from his shields. As his shields take damage they store energy and gain up to 5 stacks but shed 3/4/5/6/7 protections per stack.
Active: Cabrakan slams his shields together creating a concussive blast that deals 90/140/190/240/290 (+50% of your magical power) to enemies in front of him. If his shields have max stacks then the enemies hit are stunned for 1s.

Cabrakan repeatedly slams the ground with his shields creating an earthquake and causing enemies around him to tremble. Enemies caught in the earthquake take 25/35/45/55/65 (+25% of your magical power) damage every .5s and are slowly sucked in towards Cabrakan.

This week we are launching a new feature to promote the 2015 SMITE World Championships: The Odyssey!

Over the next 21 weeks we will travel the world, releasing a new item each week, leading up to the World Championships in Atlanta on January 9, 2015. Every Odyssey item purchased will contribute $1 per 200 gems towards the Championship prize pool.

New emotes have been added to the game for purchasing. These include Wave, Clap, Frustration, Dance, and a Special. Initially these emotes are only available on Thor and Nemesis, though more will be coming soon!