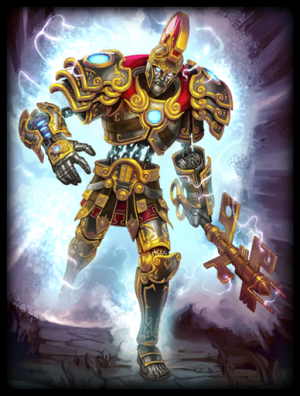 Any time Janus transitions through a portal or over a threshold he becomes aged and wizened, gaining +25% magical power scaling on his next ability cast.

Janus creates a portal in the world. If placed on a wall, the portal will create a passage through to the other side of the wall that Janus or any Ally may use. The portal may be entered from either side, but closes after 1 use. If placed on the ground, enemies and Janus will fall into the portal, being teleported into the air above it. Enemies take 80/130/180/230/280 +60% magical power as damage upon landing, and are considered banished for 1.5s during the fall.

Janus creates two unstable portals, far too small to fit into, and flings them forward dealing 90/150/210/270/330 +80% magical power as damage to enemies in their path. Enemies hit by both portals take 50% damage on the second hit.

Through Space and Time[edit | edit source]

Janus blasts a slow moving ball of multi-dimensional energy across the battlefield, burning a portal into every surface it encounters within range 500. These portals last 10s, may be used by allies, and do not vanish after the first use. Enemy gods hit by the energy take 200/300/400/500/600 +50% magical power as damage, increasing in magical scaling the further the ball travels.

In this patch the Warrior class is being re-positioned. For those of you that were beta testers, you will recall Gods used to be tagged, not classed. The “warrior tag” indicated a guardian nature with physical damage. With this change, Warriors are intended to be a “jack of all trade master of none” in lieu of “guardians that just do more damage”. The expectation is that Warriors will have to itemize to be tanks or deal damage. For example, greedy pen boots/midas + watchers will feel significantly less tanky in lane and single damage item builds (Heartseeker rush into protection stacking) will be less effective.