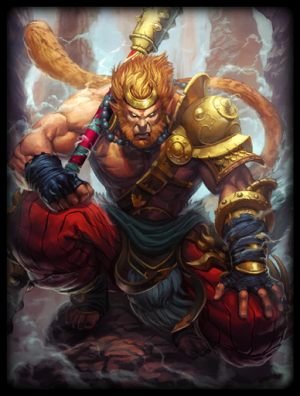 Sun Wukong transforms into an Eagle, Tiger, or Ox, and charges forward.

Sun Wukong leaps up onto his cloud, leaving a perfect decoy of himself behind to fight. While on the cloud Sun Wukong is invisible and regenerates health. He may leap off before the cloud duration expires, dealing damage to enemies. The decoy has all of Sun Wukong's current stats, but only 50% of his physical power. If the decoy dies before it's timer expires, Sun Wukong becomes visible on his cloud.
Leap Damage: 140/190/240/290/340.
Cost: 100.
Cooldown: 90s

Level * 3
Minimum respawn time of 5 seconds.
After the match has gone 30 minutes, an extra .5s is added to all respawn times every minute.

Smite Leagues allow players to compete against each other in Arena and Conquest during month long seasons. At the end of each season, players that have qualified with ten played matches are then evaluated and placed in a league tier based on their performance on the leaderboard. When the season ends, the scoring for the top 10 wins for each player is aggregated, with the top 20% of each tier graduating to the next tier. The bottom 20% are moved down to the next lowest tier. The rest of the participants stay in the current tier. Player rankings are then reset and the new season starts.

Ankh of the Golem

Ankh of the Bear

Fist of the Gods[edit | edit source]