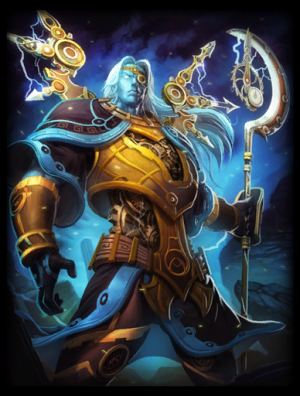 The wheel of time is always spinning and for Chronos, it is no different. Depending on where the wheel is when activating Accelerate, it provides a different benefit to Chronos.

Chronos accelerates himself over time, allowing him to progressively move 10/15/20/25/30% faster for 8 seconds. While active, his attack speed is increased by 20/25/30/35/40% and he is not affected by the attacking movement speed debuff. This ability also stops the Wheel of Time.

Shooting forward spinning gears of time, any enemies hit by Chronos' attack are slowed to a stop, taking 30/50/70/90/110 (+40% of your magical power) magical damage on the initial hit and again when they are stunned for 1s.

Chronos travels through time to where he was 8 seconds ago, gaining health and mana back to the values of that time. All of his cooldowns are instantly reset as well.