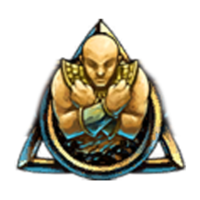 Classic Domination was an adventure type game mode in SMITE. It was available between November 12, 2019 and December 11, 2019.

This mode is a variation of the original Celestial Domination, created for the Odyssey: Underworld event.

Two teams of five players each face off against each other across 3 lanes in this blast from SMITE's past! You begin at level 3, have 1500 gold, and will gain experience and gold throught the match.

Each team begins with 500 tickets. Tickets are lost when a team controls more capture points than their opponents. Each capture point is defended by a Sand Guardian - defeat the Guardian and stand unopposed inside the glowing capture point circle to capture it and summon a friendly Sand Guardian. If no one has captured an owned point after 30s, the Guardian will respawn. Take all of the enemy team's tickets to win!